Construction to Begin on Sharswood Phase I 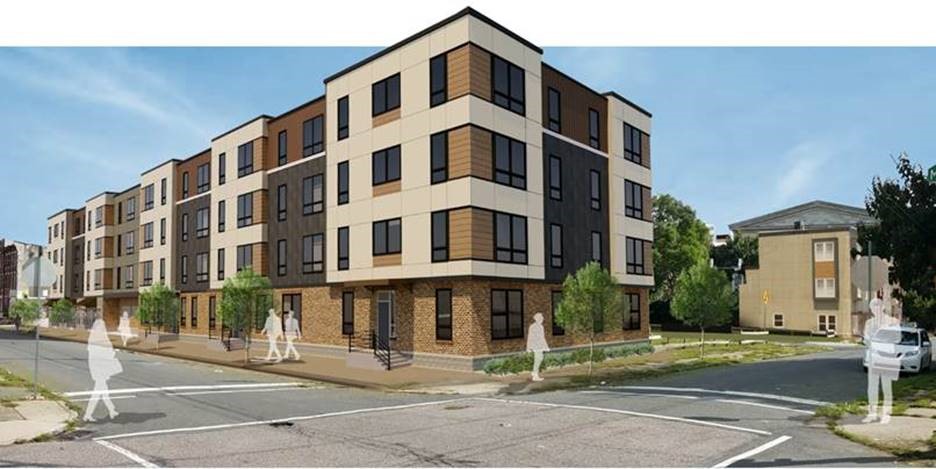 The Philadelphia Housing Authority (PHA), Hunt Companies, Inc. (Hunt), and Pennrose have closed on financing for the first phase of the Sharswood development, as part of the Housing Plan for the Sharswood/Blumberg Choice Neighborhood Initiative. PHA named Hunt as the developer of the site in 2016. Pennrose is executing the development on behalf of Hunt.

Sharswood Phase I is located on the 2000 blocks of Master Street and Seybert Street, and along 21st Street, in the Sharswood neighborhood of North Philadelphia. Phase I will include a four-story, 51-unit apartment building, nine three-bedroom townhomes, and on-site supportive services. Construction is slated to begin in January 2021.

Sharswood Phase I will consist of one-, two-, and three-bedroom apartments, with more than half of the units available to residents earning 50% or less of the Area Media Income (AMI). Of the total units, six units are set at 20% AMI, 25 units at 50% AMI, 23 units at 60% AMI, and 6 workforce housing units will be available at 80% AMI. Thirty apartments will have Project-Based Vouchers, provided by PHA.

“The Philadelphia Housing Authority has been dedicated to the revitalization of the Sharswood community for years and we’re proud to help execute the next stage of their comprehensive vision for the site,” said Jacob Fisher, Regional Vice President at Pennrose. “The plans for Phase one will transform a blighted, abandoned block into brand new, high-quality affordable housing, with supportive services and amenities that will be a benefit to the entire neighborhood.”

The modern apartments will feature Energy Star appliances and will meet Enterprise Green Communities standards. Residents will also enjoy access to a host of amenities in the four-story building, including a community room, laundry facilities, fitness center, on-site management offices, and entrances off of both Master Street and Seybert Street. There will also be parking available to the residents of the entire development. In addition, the development team plans to partner with local service providers to offer on-site, tailored supportive services to help improve the overall quality of life for residents.

PHA was awarded a $30 million Choice Neighborhoods Implementation grant from the U.S. Department of Housing and Urban Development in April 2020 to help create 1,200 affordable homes as part of the Sharswood Transformation Plan, which aims to preserve affordability in an area facing rapid gentrification. Since work has begun in 2016, 140 brand new single-family rental homes have been completed along with the redevelopment of the Blumberg tower, which includes 94 senior housing units.

Sharswood Phase I will be financed through a combination of 9% Low-Income Housing Tax Credits (LIHTC) from the Pennsylvania Housing Finance Agency (PHARE), PHARE funds from PHFA, City of Philadelphia HOME funds, gap financing from the Philadelphia Housing Authority (PHA), and permanent debt. Bank of America, N.A., is the tax credit investor and construction lender and Lument is the permanent debt provider through a Freddie Mac transaction.

“Hunt is pleased to partner with the Philadelphia Housing Authority in its efforts to transform the Sharswood-Blumberg area,” said Sinclair Cooper, Executive Vice President with Hunt.  “This milestone was accomplished through a collaborative effort and, when complete, will provide much-needed quality affordable housing options.”

Pennrose has a successful track record developing high-quality affordable housing communities in Philadelphia and throughout the tri-state area. Most recently, Pennrose began construction on the final phase of the Kinder Park redevelopment in Ridley Township, which will add 96 units of affordable senior housing to the current site, which includes 160 existing affordable apartments for seniors and individuals with disabilities,154 new family townhomes, a new community building, and several new community parks.