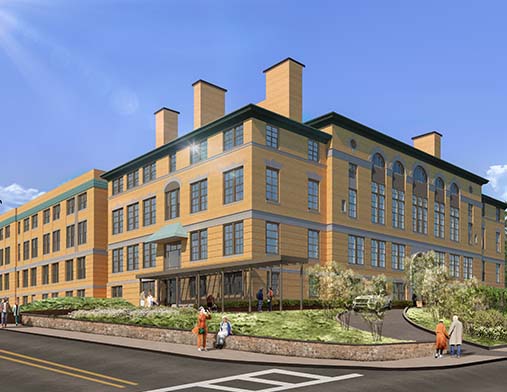 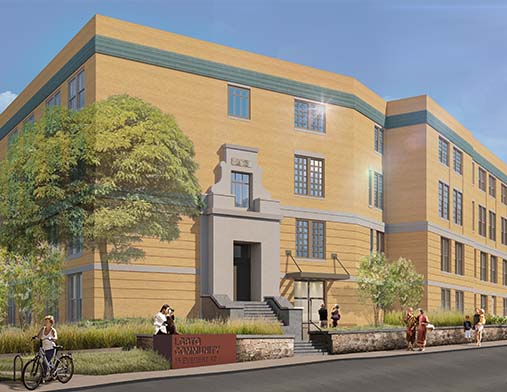 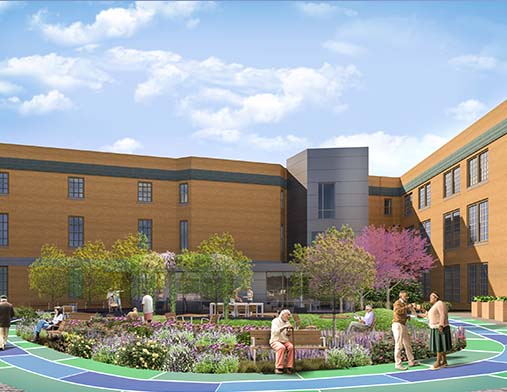 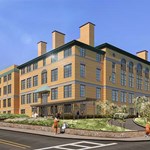 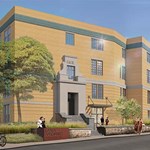 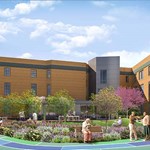 William Barton Rogers Middle School, formerly Hyde Park High School, has been serving and educating the Hyde Park community for over a century. Originally built in 1902 as a high school, the building has been adapted and reconfigured numerous times, with additions constructed in 1920 and again in 1934, to better serve the needs of the Hyde Park community. Today, while it is no longer able to serve as an educational institution, it remains an anchor that can continue as a monument to, and celebration of, the Hyde Park Community as well as serve as safe, mixed-income, LGBTQ friendly senior housing for Hyde Park and Boston residents. Pennrose will reactivate the former public school as a vibrant, welcoming, and inclusive space that will not only house the seniors of Hyde Park but also celebrate the history of the former school and the history of Hyde Park. The entirety of the building will be preserved and adapted for this new use, which includes preservation of the historic exterior facade as well as significant interior architectural elements such as the frieze and stage of the auditorium, mosaic tiles, gymnasium, and more. We will retain the large spaces in the interior of the building for general use by the community. Architect DiMella Shaffer’s design includes preserving the auditorium, the gym, the cinema room, and the front entrance and retains 10,000 sq. ft. of space to be used by the public that will cater to residents and the community. Community organizations can use the space for meals, events, activities and can hold meetings, classes, and workshops there.

The redeveloped Rogers School will be a senior housing development, with approximately 74 units available at a range of incomes, from 30% of AMI to 100% AMI, so that everyone has an opportunity to live here. There will be a mix of studios, one-bedrooms, and two-bedrooms. The entire development will be visitable and follow Universal Design principles. Residents can enjoy all of the public community spaces as well as additional amenities in the residential section of the building. The main residential entrance is on Harvard Avenue, recreating the historical porte-cochère that likely served as the primary entrance to the building in the early 1900s. We converted the former administrative offices to the left of the residential entrance into a lobby area where residents can check their mail, grab some coffee, or sit and chat with their neighbors. This common area will have seating and tables that will allow for informal mingling among residents. To the right of the residential entrance will be our management offices. Two main elevators have been strategically located in the courtyard, near the two knuckles of the building to reduce the distance that seniors will need to walk to enter and exit the building from their unit. We have employed a similar strategy for laundry rooms, locating two on each floor in such a way to limit the distances seniors will have to walk to do laundry. The auditorium on the second floor will be preserved for resident gatherings, serving as the community room for residents. We have added bathrooms on either side of the auditorium to improve the functionality of the space for large events. Additionally, we added a small kitchen to this space for food events. Congregate meals could be organized in the auditorium or in the gymnasium. On the fourth floor of the residential wing, there currently exists a room with built-in tiered seating which we propose to convert into a resident cinema space where we could host movie nights.

The Courtyard, which is a central amenity to the development plan will have controlled access but will be accessible to the community and residents through the building itself or via the side entrance on Everett Street on the side of the building. We are committed to make this space available and open to the public, while ensuring resident security and privacy.