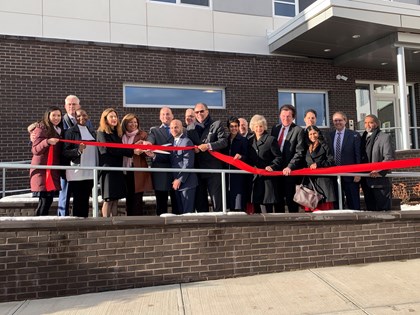 Meriden Commons II adds 76 high-quality, mixed-income apartments in three buildings, including two townhouse-style buildings and one midrise elevator building with more than 1,500 square feet of commercial space. Offering one- to four-bedroom floorplans, the site includes 60 affordable units available to residents with incomes ranging from 25-60% of the Area Median Income (AMI) along with 16 unrestricted, market-rate apartments.

“The city’s vision for downtown Meriden and the collective effort to transform the area through capital improvements, real estate investment and transportation has been truly remarkable,” said Charlie Adams, Regional Vice President at Pennrose. “I’d like to thank the city and housing authority for their trust and support in us as a development partner on both project phases. Meriden Commons will be an asset to residents and the larger community for many years to come and we look forward to continuing to fulfill the city’s vision for market rate housing to activate the Green.”

Meriden Commons II is energy efficient and designed to meet Passive House standards. Located at 177 State Street, residents will have easy access to the Meriden Transit Center and Meriden Green park, along with community amenities including a playground, and community room. All apartments feature a modern kitchen with dishwasher, in-unit washer and dryer, and central A/C.

In total, Meriden Commons I and II delivered 151 residential units and over 6,900 square feet of commercial and retail space. The projects were designed by WRT and constructed by Haynes Construction Company as part of a larger revitalization plan called Meriden 2020: A Comprehensive Plan for Downtown Meriden, which was awarded a $500,000 Choice Neighborhoods Planning Grant in 2013. In addition, the third phase will include 120 market rates units to activate the Green in fulfillment of the city’s request for proposals for stimulating additional economic development.

Financing for Meriden Commons II includes $15,8 million in tax credit equity from Capital One syndicated by Hudson Capital from credits provided by CHFA; $6 million from DOH; and $5.2 million in conventional debt from Capital One.