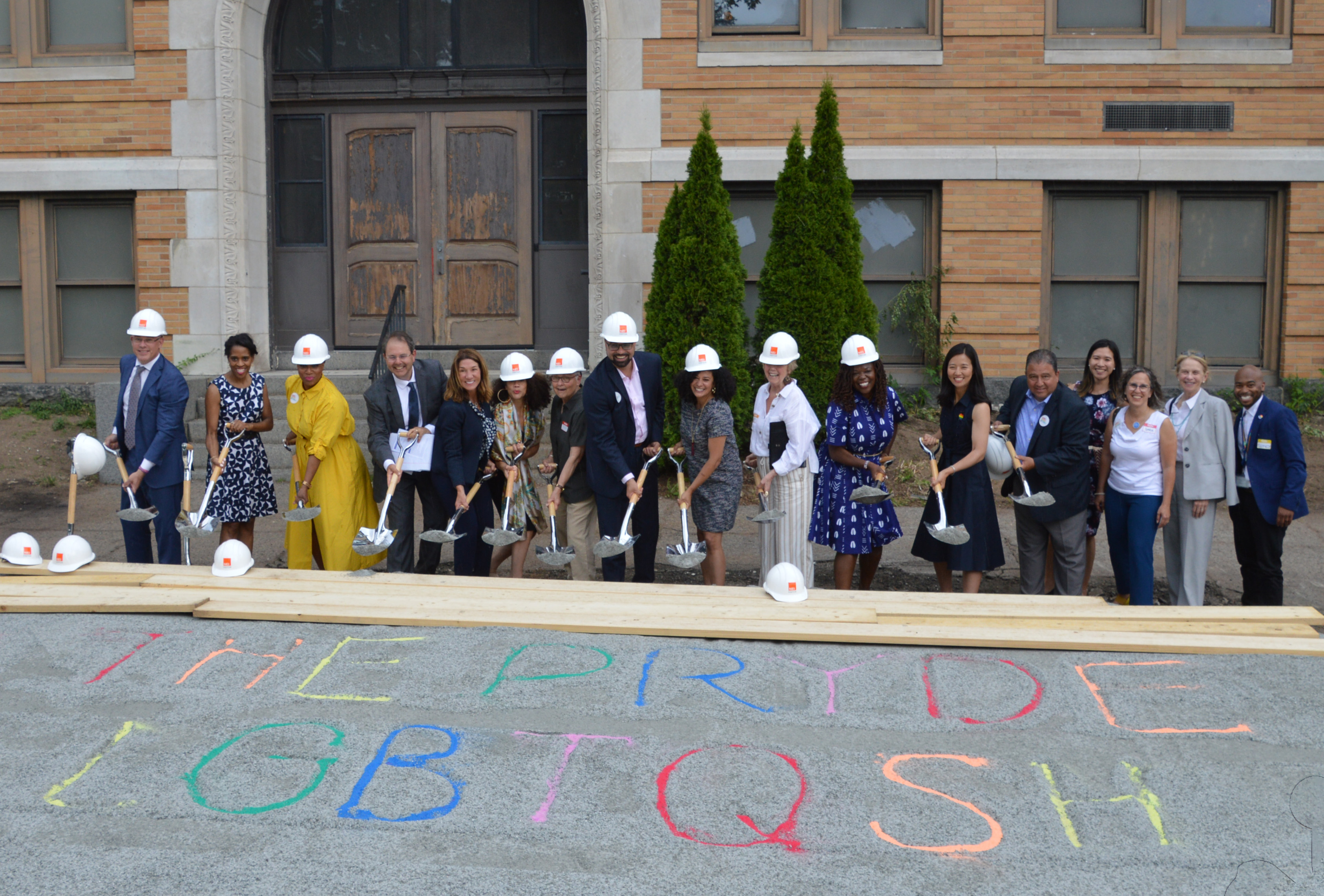 Mayor Michelle Wu today joined state and City officials, Pennrose, LGBTQ Senior Housing Inc., and the Department of Housing and Community Development (DHCD) to break ground on The Pryde, Boston’s first designated LGBTQ-friendly housing development for older Bostonians. When complete, the renovations of the former Barton Rogers School in Hyde Park will preserve the original 1899 building and its two additions from 1920 and 1934 while creating 74 new mixed-income rental units that will be welcoming to seniors 62 years and older. All units will be deed-restricted in perpetuity and will provide affordable, safe housing for seniors across a wide variety of incomes.

“Building a city for everyone means ensuring that as our residents age, they can stay here in the City with safe, affordable housing that is welcoming to all,” said Mayor Michelle Wu. “This new development will be an incredible asset to the neighborhood, offering not just housing, but gardens, walking trails, an art studio with gallery space, and other community benefits to truly make our LGBTQ+ seniors feel at home. As we celebrate Pride Month, this is a shining example of how Boston can breathe new life into existing spaces for the benefit of our residents.”

“Older adults are the fastest-growing population in Massachusetts, and housing needs for this population are unique – and in high demand in every region. The Pryde in Hyde Park is the first of its kind in Massachusetts to provide tailored housing for our LGBTQ neighbors to age in this vibrant neighborhood,” said Lt. Governor Karyn Polito. “We are thrilled to continue investing state and federal funds to increase housing opportunities in the Commonwealth.”

The redevelopment is being led by Pennrose and LGBTQ Senior Housing, Inc. who worked extensively with the local community in Hyde Park to meet the needs of residents. The Pryde is located near shops and restaurants and a variety of cultural and outdoor amenities, including the Menino Arts Center and the public library. It is also close to two MBTA commuter rail stops serving the Fairmont and Providence lines.

“The Hyde Park community has completely embraced us and our plans for this building, as a welcoming and friendly complex,”  said Charlie Adams, Regional Vice President at Pennrose. “This treasured neighborhood asset served the neighborhood well for 100 years, and will now serve it for another 100 years not just for residents but for the community at large with over 10,000 square feet of gathering space.”

The new building will include elevators for accessibility, central air, on-site laundry facilities, a large community space for programming, and an art studio with gallery space for residents on the first floor. It will also be the new home office of the 54th Regiment organization. There will be a courtyard with green space that will also feature a community garden and recreational space available to all the residents. In accordance with the City of Boston’s Building Emissions Reduction and Disclosure Ordinance (BERDO), The Pryde will include energy-efficient heating and cooling systems, as well as Energy Star rated appliances, and will have environmentally friendly design features throughout. The building was designed by architect DiMella Shaffer and is being constructed by NEI General Contracting.

“LGBTQ seniors face higher rates of housing discrimination, lower incomes, higher unemployment, increased food insecurity, and deal with the legacy of trauma and social isolation, with fewer traditional supports,” said Aileen Montour, president of LGBTQ Senior Housing, Inc. “We are proud to work closely with all project partners - the city, the state, DHCD -  and to have the unwavering support of Mayor Wu to help address this inequity in Boston through affordable, inclusive housing that sets an example for other cities throughout the country. Our older adults especially appreciate the opportunity to live authentically and unapologetically in a supportive community - we feel seen, heard, and cared about.”

"At HUD, we are focused on housing and community development with a dedication to equity, inclusive communities, and quality, affordable homes for all," said Michele Perez, Assistant Deputy Secretary for HUD's Office of Field Policy and Management. "HUD's greatest hope is that these efforts are sustainable and become a normal, natural way we operate. That is why it is so inspiring to be here to break ground on The Pryde today."

Of the 74 total income-restricted rental units in the new Barton Rogers development, eight will be rented to households of individuals who are homeless or who require rental assistance. Another three will be deeply affordable units for seniors with incomes up to 30% Area Median Income (AMI), seven units will be available to households earning 50% AMI, and thirty-two units will be available to a two-person household earning less than 60% AMI, eight households earning up to 80% AMI, and sixteen units will be set aside for 100% AMI.

The William Barton Rogers Middle School was built in 1899 on 74,000 square feet of land in Boston’s Hyde Park neighborhood. The original building was expanded twice, once in 1920, and then again in 1934. In the more than 100 years of its operation as a Boston Public School, it served as a high school, and later a middle school. Before its closure in June 2015, the Rogers School put an emphasis on the performing arts and inclusivity for all.

“We need in every community a safe haven with open doors for all. A place where you can be who you want to be,” said Pat Tierney, a local neighborhood advocate. “We thank Pennrose and LGTBTQ Senior Housing Inc.,  the City of Boston, and partners for giving Hyde Park The PRYDE.”

Financing for The Pryde includes $4 million from the City of Boston Mayor’s Office of Housing including $2 million of Community Preservation Act funding; $3.825 million from the Department of Housing and Community Development (DHCD); TD Bank, facilitated through Redstone Equity, provided over $16.4 million in Federal Low Income Housing Tax Credit (LIHTC) and Federal Historic Tax Credit equity, and over $21 million in construction financing. The Commonwealth is providing $2.95 million of State Low Income Housing Tax Credits which generate over $12 million in equity and $1.8 million of State Historic Tax Credits which generate over $1.6 million in equity; Massachusetts Housing Partnership is providing over $6.6 million in permanent loans, the Community and Economic Development Assistance Corporation (CEDAC) is providing $750,000 of Community Based Housing (CBH) funding; the Federal Home Loan Bank Of Boston is providing $650,000 of Affordable Housing Program funds; LGBTQ Senior Housing is providing funding in the amount of $350,000.