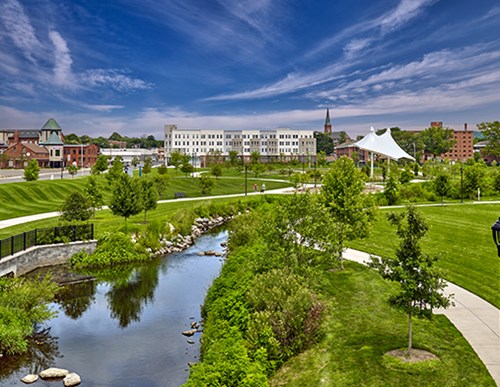 The CTfastrak dedicated bus line from New Britain to Hartford was designed not only to provide a car-free alternative for central Connecticut commuters, but to spur economic development and multifamily housing near stations along the 9.4-mile route.

In Meriden, developer Pennrose is buying into the downtown’s future potential as it moves ahead on the second phase of Meriden Commons, a 151-unit apartment complex built on 1.7 acres near the city’s CTfastrak station.

“We’re a big believer in sustainability and saw an opportunity to do something that would benefit our project and give us the resources to pay for it,” said Charlie Adams, Pennrose’s regional vice president for New England.

Construction of the second phase at 177 State St. began last July. Scheduled for completion this fall, the complex will include 76 apartments in three buildings, including two townhouse-style buildings designed to accommodate four-bedroom units for families.

The first phase, with 75 units in a midrise building at 161 State St., was completed last July and is now fully occupied, with rents that average up to $400 a month more than comparable properties in the downtown, Adams said.

Pennrose partnered with The Cloud Co. of Hartford, Connecticut on both phases of the project, which also received $11.7 million from the Connecticut Department of Housing in the form of a 1 percent loan.

Pennrose leases the property from the Meriden Housing Authority, which owned a 144-unit public housing complex that was demolished late last year to make way for the new development. Tenants were given first chance to reserve units in Meriden Commons, which contains 80 percent income-restricted units in both phases.

Founded in 1971 with a specialty in affordable housing, including conversions of historic buildings, Pennrose has developed more than 17,000 apartments units east of the Mississippi exceeding $3 billion in development costs.

“The housing authority had tried to get this site developed for many years,” Adams said. “These things take a long time, they’re hard, they’re challenging and it takes a lot of fortitude and you’ve got to see it through. Pennrose does a lot of this and we know how to move these things along.”