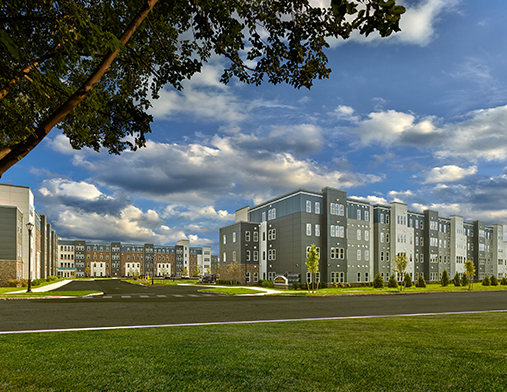 It has been more than a decade since Leslie Stivale’s initial call with the U.S. Army about the closing of the Camp Kilmer site in Edison.

On May 15, Stivale, president and chief executive officer of Triple C Housing Inc., attended the groundbreaking of Phase 1 of the Truman Square redevelopment on the site of the former Camp Kilmer site.

“It’s been a long journey,” she said, recalling the “long winding road” of the BRAC – base realignment and closure – process and negotiations with the U.S. Department of Defense. “I’m so happy to be here.”

In 2007, Edison Township took its first steps in acquiring a 23-acre plot of land aimed at ultimately acquiring the last remaining land in Camp Kilmer, which had been a largely unused Army base at the intersection of Kilmer Road and Truman Drive. Camp Kilmer was the largest processing center for troops during World War II, processing more than 2.5 million soldiers. It officially closed in 2009.

Pennrose LLC is developing the first phase, which includes 86 one-, two- and three-bedroom units of affordable family housing for households with annual incomes between 20 to 60 percent of area median income (AMI), with 25 percent of the units designated as veterans housing and 25 percent set aside for the formerly homeless.

Twenty-two of the units at the lowest AMI will be supported through New Jersey’s Division of Developmental Disabilities and the Division of Mental Health and Addiction Services. Residents will have access to a community space, a fitness center and parking.

Lankey said he is proud of the entire team who worked together to make Truman Square a reality.

“Nothing happens without a team working together,” he said, adding they are coming together not only for the development of housing, but most importantly giving the most vulnerable population – veterans, seniors, people with disabilities and struggling families – peace of mind.

Fisher said for the past two-plus years they have worked with their partners in Edison along with their finance team to make the vision of affordable housing a reality.

“At Pennrose, we always build to the needs of the local community,” he said. “Providing access to high quality, affordable housing and tailored supportive services on a historic military site is a really special opportunity to bring an underutilized site back to productive use.”

Patton said she and Ben Carson, U.S. Secretary of HUD, are proud to support efforts such as the one in Edison through $400,000 in HUD HOME funds. She said the funds “coupled with local and private funding sources will ensure housing for the homeless, disabled and area residents for years to come.

“For those who give, we must give back,” she said, noting the housing development to help homeless veterans is fitting on the former Army base.

Pennrose Management Company will serve as property manager for the community and Triple C Housing Inc. will provide supportive services for veterans and formerly homeless residents, including peer support and veteran-to-veteran services. The project was designed by WRT LLC, Philadelphia.

To read the article on Central Jersey News, click here.