Federal, state and local officials, as well as representatives from Pennrose, The Cloud Company, and the Meriden Housing Authority, celebrated the start of construction for the first phase of Meriden Commons at a ground breaking ceremony today. The 75-unit mixed-use and mixed-income development will be constructed on 161 State Street, adjacent to the existing Mills Memorial Apartments public housing site that will soon undergo demolition.  A second phase of 76 units has already been awarded financing by the Connecticut Housing Finance Authority and the Connecticut State Department of Housing and is expected to break ground early next year at the corner of State and Park.

Meriden Commons I will provide residents with high-quality housing options for those earning under 60% of the AMI. Fifteen units will be unrestricted market rate units. Each of the one-, two- and three-bedroom residential units will include a washer/dryer, dishwasher, and resident controlled heating and cooling. The building will be extremely energy efficient, including a solar roof installation.  Community amenities will include a community room and fitness center. The first floor will include 5,445 square feet of commercial space for retail tenants.

Meriden Commons I will be located at 161 State Street, and will be a signature building fronting the new 14-acre flood control park. It will be located in close proximity to the improved train station and the rail line connecting Meriden to both Hartford and New Haven. 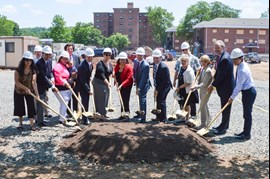 “When both phases are complete, there will be an economically diverse population of residents living in the 151 apartments,” said Charlie Adams, regional vice president of Pennrose Properties, LLC. “This diversity is a key component of the Meriden Choice Neighborhoods transformation plan and could not have been accomplished without the great work of, and collaboration with, the Meriden Housing Authority.  Moreover, it builds on the great strides the City of Meriden has made through the creation of the Meriden Green and the improvements at the train station.”

The $27.46 million development will be funded with $1.5 million in low-income housing tax credits from the Connecticut Housing Finance Authority, $5.74 million in permanent loan funds from the CT State Department of Housing, $750,000 from the Federal Home Loan Bank of Boston, and $21.72 million private debt and equity.