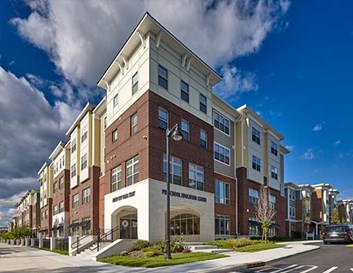 Located in a designated New Jersey Smart Growth Area on the west side of Jersey City, GRCH IV is part of the A. Harry Moore HOPE VI Revitalization Plan, a vision formalized in 2005 by the Jersey City Housing Authority to redevelop obsolete and deteriorating public housing inventory throughout the city. GRCH represents the combined efforts of two development teams over four construction phases, and almost 12 years, to replace 664 units in seven towers of a 1950’s era, high-density public housing with modern high-quality family housing.

“Gloria Robinson Court Homes IV represents the power of well-designed public housing to revitalize entire communities,” said U.S. Senator Bob Menendez (D-NJ). “I am excited to see this final phase of development honored by the Edson Awards as one of the most outstanding affordable developments in the country. This is a testament to why we as a country need to invest more, rather than less, in affordable and sustainable places for people to call home.”

GRCH IV is home to an 11-classroom Jersey City Head Start offering Pre-K Early Childhood Education Programs. The Head Start facility offers quality early-childhood and pre-school programming to children of the neighborhood. The children of GRHC that enroll in Head Start’s subsidized programs will receive healthy meals, high-quality instruction and supervised play, and will enter elementary school ready to succeed. The convenient on-site location ensures that parents have easy access to childcare and more flexibility to work. The combination of easy access and quality of the pre-school will benefit the families of GRHC by improving household incomes in the short term and positioning children for success in the long term.

The development is part of a HOPE VI Revitalization and received HOPE VI funds from the Jersey City Housing Authority. The development also received an allocation of Low Income Housing Tax Credits from the New Jersey Housing and Mortgage Finance Agency, CDBG-DR Sandy Relief Funds, and HOME funds from the City of Jersey City. Bank of America provided construction financing and equity through the purchase of Low-Income Housing Tax Credits.

“Jersey City has taken great strides to address our affordable housing challenges,” said U.S. Representative Donald M. Payne Jr. (D-NJ). “Innovative developments like Gloria Robinson Court Homes IV should serve as a model for future initiatives as we work together to solve these challenges once and for all.”

Presented to the most outstanding Low-Income Housing Tax Credit (Housing Credit) properties in the country by the Affordable Housing Tax Credit Coalition, the Edson Awards take place each year on Capitol Hill. The event brings together members of Congress, businesses and organizations to celebrate Housing Credit developments at the forefront of creating stronger, healthier communities in urban, suburban and rural areas nationwide.

The Housing Credit is America’s and New Jersey’s primary tool for creating and preserving affordable housing, financing nearly all of the affordable rental homes, almost 3 million across the country, since it was signed into law by President Ronald Reagan.

“The Edson Awards recognize the Housing Credit’s ability to strengthen lives, communities and the economy, and this year’s winners remind us how vital the program is in New Jersey and across the country,” said Anthony J. Alfieri, president of the Affordable Housing Tax Credit Coalition. “As the primary source of financing for affordable housing, the Housing Credit must be expanded to make more developments like Gloria Robinson Court Homes IV possible.”

A panel of four judges selected eight first place winners and eight honorable mentions for this year’s awards program. Given annually by the Affordable Housing Tax Credit Coalition, The Edson Awards are named for Charles L. Edson, an affordable housing luminary who was Transition Director for the U.S. Department of Housing and Urban Development (HUD) on President Carter's Transition Staff. Mr. Edson served in the Office of the General Counsel at HUD and served as Co-Editor-in-Chief of Housing and Development Reporter for nearly 40 years. He is a founding partner of the law firm Lane and Edson, and was later a partner of Nixon Peabody LLP.