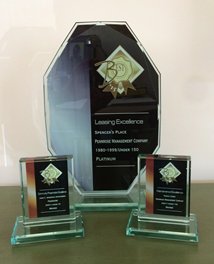 Pennrose Management Company won three awards at the Pennsylvania Apartment Association-East (PAA-East) Best in Apartment Living Awards hosted in Drexel Hill, Pa., last night. It was the first time that Pennrose properties have been recognized by the association.

“What an honor for three of our properties to have been recognized by PAA-East for three different award categories,” said Lee J. Felgar, president of Pennrose Management Company. “It is inspiring to see the enthusiasm of the property teams when they are recognized for their great work.”

The PAA-East awards recognize excellence in the apartment industry in the Philadelphia area. Award winners exemplify high standards for physical qualities, marketing achievements, and management caliber. The winners are announced each year at the association’s annual banquet.